The Data is in: Afterlife Belief Makes People More Bloodthirsty 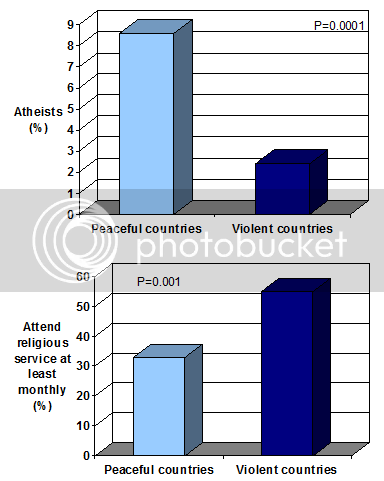 If we can all just hold on through this veil of tears...this trivial, unimportant, flicker of existence we call life, we'll finally be free in death...

Nothing to fuck up our perspective of Reality like pretending it's just a little gracenote before everlasting hangout time with resurrected zombie.

I was trying to explain to some coworkers (all mormon) that if atheists are more unlawful, it would make sense that they should be represented in prisons at at least about 5-15%, the same level they are represented in society, or more, considering the atheistic lack of morality we all hear about. But, they show up at, what, less than 1%? After this one girl said, for the third time, "See, but you have to take into account that there are a lot fewer atheists, and that might be why the numbers are off," and after I had explained two times that my assessment accounted for that, I realized that someone who can't even grasp rudimentary pseudostatistics has little hope of ever understanding how someone who doesn't have hope or fear of an afterlife could be moral.

So, perhaps I will follow your blogs, and post incendiary comments on your anarchist ones, while you can do the same on mine, and we can all join here in the safe zone of sure rationality for some R and R. Because, while I'm maybe 70% sure that liberalism is a positive for society, I'm about 98% sure that god is an imaginary horror.

above is posted by me, under the old account I cannot figure out how to delete. Thanks to the google/blogger connection I always accidentally post under it.

Thanks for the post CashewElliott! Yeah let's agree on atheism and give a critical eye to each-others political views :)

Sgufala is the right way.

First of All, these statistics hold no proof that God doesn't exist, they simply suggest that there are more hypocritical religious people (or cult/occult followers) then there are Atheists that want to war.

And obviously Atheists wouldn't want to make war because the life they have now is the only one they have. And then all the hypocritical "religious" people think they have life after death, so why not waste each other.

This blog is wonderful at pointing out "Christian" people's flaws but that's all it does. It points to the sin that shouldn't be there and assumes God must not exist.

P.S. Mormonism isn't even part of Christianity because their foundation is not Jesus Christ. They're a cult.

Right...Statistics are irelevant. What does it make you a good or bad person? What is morality? Afterlife doesn't exist? Well, what makes you so confident about that?
We are free to choose what to believe. What will be, will be, no matter what one may believe! We'll just have to wait and see who was right ;)! If there's no God -> you're dead, and that's it! But WHAT IF THERE'S a God? What will you do then?

Cool blog you got here. I'd like to read a bit more about that topic.
By the way look at the design I've made myself Young escort

Rather cool place you've got here. Thank you for it. I like such themes and everything connected to this matter. I would like to read a bit more on that blog soon.